For all enquiries call 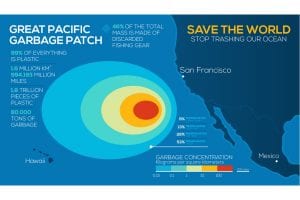 This has been the year of the Blue Planet. David Attenborough’s TV series was the catalyst for an incredible global backlash against single-use plastics, and big companies seem to be coming around to the need to do something about it … albeit very slowly. Unfortunately, even though the world has only just woken up to the issue, the problem has existed for a very long time.

In fact, scientists have been researching what has become known as the Great Pacific Garbage Patch since the 1970s! It is thought the Patch originated from plastic waste that had been deliberately dumped or accidentally made its way into the world’s oceans, and was carried by the circulating currents till it reached this relatively stationary area between Hawaii and California.

The statistics are shocking. Scientists estimate that there are 1.8 trillion bits of plastic in the Patch – 250 pieces for every person on the planet. At 1.6m km2 – an area that’s three times the size of France – the patch is the largest accumulation zone of ocean plastic. It’s estimated to weigh an incredible 80,000 tonnes. And it’s increasing in size all the time.

Some of the plastic will fragment into micro plastics over the next few decades, but it will never break down. Which means it’ll pollute the ocean and even more of it will be eaten by sea creatures, poisoning the food chain.

What is being done about it?

Work has finally begun on a cleanup operation, with the launch of System 001 at the beginning of September this year. This free-flowing collecting boom is due to arrive at the Great Pacific Garbage Patch imminently. It will eventually be part of a fleet of 60 systems which, it is hoped, could clear 50% of the patch in 5 years. The idea is to then recycle the recovered plastic into new products.

Sadly, the Pacific isn’t the only ocean to have a Garbage Patch. There are similar garbage patches in the Indian Ocean and the North Atlantic Ocean. Similar cleanup projects being planned globally will hopefully clear 90% of the oceans’ plastics by 2040.